Making good progress on my spider riders. Need to varnish, then get out the snow and ice.  I really wanted all 10 done by now, but hobby time is greatly reduced with school starting, since I have to get up so early to get the kids out the door. 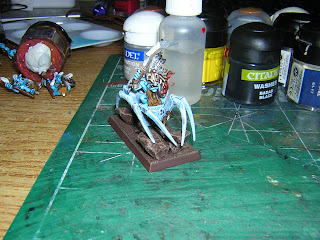 I've been playing in an escalation league for Fantasy, so I've been playing a lot. Starting at small games, I got 3 in last week!  Once thing I can say, is that WHFB has a lot more rules in general then 40k, it's not that it's more complex per se, but it just has more rules lol.

Next week is 850pts, and a special rule were you have a "master mage" which you pick a caster that has loremaster and other special rules. I still only have 1 caster, so he gets to be it!