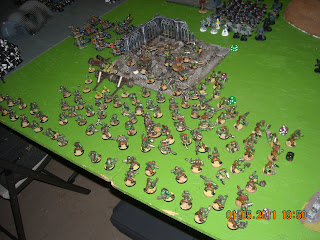 My first game of 2011 really threw me for a loop. I ended up playing an all footslogging Space Wolf army.

I made a last second change to the list, dropping a bike and a grot to change the warboss to wazdakka. Not sure if I will keep this or not, but it make the bikes scoring which could be really good if I don't get too aggressive with them like I did in this game. I'm not sure if trying to reach the other flank with the would have worked out any better, and I might have lost the unit without doing any damage. At least they wiped out a scoring unit.

I really did not anticipate going against this list when building my de-meched orks but I should have considering how good and popular it has become. I need to develop an over all strategy specific to this build.

Since this was an objective game, my goal was to keep as many orks alive as I could, while getting ready to sprint for objectives near the end of the game. My opponent pretty much played exactly the same. Both my giant units had taken virtually no losses throughout the game. This kind of wolf list has very little anti-infantry shooting, and since I concentrated loota fire on his long fangs he didn't even get out a lot of templates.

My one unit of lootas was absolutely devastating. Of course it helped I only rolled 1 shot each once, in turn 6. After the first turn where I took out 4 out of 5 missile launchers in the first logn fang unit, I wasn't too worried about templates. On the other side, the long fangs were basically useless. They are meant to take out vehicles. I love facing a lot of lascannons with my list. I think the long fangs killed more orks when assaulting then from shooting..

The first thing that he targeted was the tankbustas. No vehicles meant their S8 Ap3 shooting was free to fire at will. Obviously they had to die first, and their sacrifice took an entire turn of shooting off the lootas. mission accomplished.

I think in a killpoint mission I would have been even more aggressive, not hanging back trying to claim objectives.

There is also a variant with thunderwolves as a hammer/alpha strike unit. That kind of list would fit right into my overall strategy - bait the hammer unit into my leading screening unit, and then wipe them out with massive shooting - so I wouldn't need to change anything for that.

But overall this game shows the goal of demeching - to render the opponents anti-vehicle shooting a waste of points, giving me an advantage. That is exactly what happened.
Posted by Sorien at 7:56 AM