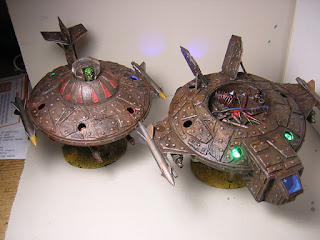 The biggest problem with my current freebootaz list is the 2 gorkanauts. I only have one and I'm not convinced 2 works. I want some more anti-vehicle hitting power and for that I'm falling back to the new buggies.  Also I have 4 really cool conversions I want to field.

I've had success with Megatrakk Scrapjets in the past, and giving them +1 to hit sounds good.  Even better is the Shokkjump Dragsta's Shockk rifle hitting on 2+

Of course putting the buggies in the Dread Mob so they can use the shoot again stratagem if needed.

That is a lot of heavy-hitting accurate firepower.  The dakkajets and 'naut provide plenty of anti-infantry shooting.  Overall I love this list.
Posted by Sorien at 6:52 PM