Yay I was able to buy some new models!

I've been messing around with the Grukk's Rippa Krew formation from Stormclaw, but I didn't have a Grukk model.  I had the chance to pick up a new box and after much hemmin' and hawin' I chose the Grukk's Boss Mob box over the Battle for Vedros starter.  But I still want the starter..for sure!

I built the nobs up as the formation Skrak's Skull Nobs requires: 1 plain, 1 with bosspole, 1 with combi-Skorcha and ammo runt, and 2 with PK's and Bosspoles.

They will be painted in strait up Goff colors strait off the GW website, for those times I get board painting Helicarrier parts. 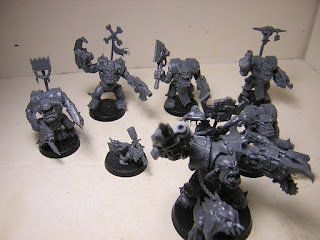