There is this view of the Ork army, a view of a endless green tide of Orks that run forward with the idea that I have more bodies then you have bullets. That I will decent upon you with a ferociousness and exuberance to fight.

The 4th edition codex, you could actually do this.

The 7th edition codex, not so much.

You have to have SOME sort of survivability, especially if there is terrain on the board.  Even more so if the opponent has a noticeable amount of blast weapons. The old KFF actually did this pretty well, against most armies anyway.  It really was a must have if you played infantry or mechanized, shooty or assaulty. Combined with the mob rule, where the Orks were fearless until they were almost wiped out meant you didn't have to care how many bodies you put in your dead pile.

The 7th ed codex has taken both of those away, so the mass of cheap boys no longer has any chance of making it across the table.  You must instead spend points to buff up the individual Ork, resulting in fewer models at the same point level.

In other words, toys before boys.

Don't get me wrong, it WORKS.  Units of 30 'ard boys with FNP are just absolutely fantastic and provide a level of survivability that even the old KFF couldn't match.  The combination neuters the Orks usual nemeses such as flamers, SMS, Thunderfires and Wyverns.  Add in the fact that every unit of boys can now take 'eavy armor means you have a very tough army.  The same combination also means damage from the Mob Rule table is almost non-existent.

It's just not very..well, Orky.

The 'ard shoota boy is 11 points. That's 2-3 points less then your average space marine.  Then you add a 50pt painboy to the unit.

Those points add up quick.

I don't like it.  However, despite how much I don't like it, it is actually far superior to the old codex.  FAR superior. I might even consider going back to units of 20 instead of 30, that's how survivable they really are.  Oh, I also forgot to mention that they can go to ground, so being able to hide in terrain adds yet another level of survivability boys didn't have before.

In the end, you'll end up using half the army you use to take.  But you will end up with far fewer of them dying over the course of a game.

Next month is 1850 Maelstrom missions, so I need to run Combined Arms detachments to gain objective secured. 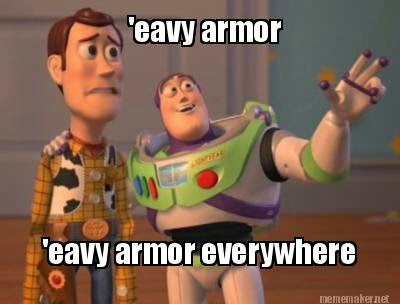 So that's one unit to sit back and take objectives, and 3 units to be way aggressive.  We'll see how it goes.
Posted by Sorien at 12:13 AM