Last 2 days I've been working on the cannon itself. So far, so good but I've been running into one stumbling block after another.  Right now my biggest challenge is the tank treads. 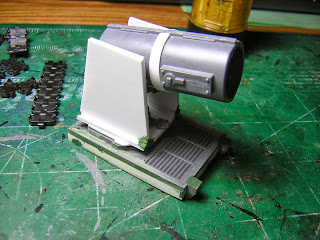 The barrel mount is removable and will probably end up magnetized. Not sure about the barrel itself yet.  Happy with the detail level, but I need to finish the tracks before I can work on the rear stabilization arms.

The width of the barrel with the side pieces is exactly 20mm so that's kinda cool. Going to make a box to fit behind the barrel to extend it out even longer.

Well that's it. A quick update. Several hours of work..most of it staring at tank treads trying to figure something out..
Posted by Sorien at 12:42 AM