Road to the Bay Area Open 4

So of the list of things to do before the BAO the one I've put lowest on the list is painting new tau models.  Instead I've decided to build and paint another looted jetbike for my defkopta unit.

Also slowly working on getting arms painted.  After breaking out my hobby stuff from storage (still missing some of it! arg!)  I was able to varnish and base the models I painted last couple of weeks and move on.

So far, so good.  Lining up the arms is turning out to be harder then I remember...well it was 5 years ago.. 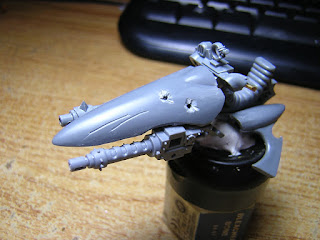 I still need to figure out some ammo feeds and maybe replace the wings with something else.  Undecided.