A flank is a $2 word for side.  The standard refused flank is used usually when you have a spread-out deployment like here: 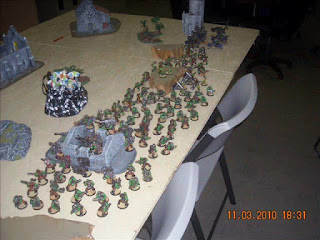 This is not atypical for a large foot Ork army.  There are a lot of models and not much space.  Pitched battle is the most common deployment but same would also apply to dawn of war..the only difference between the two is when the models are put on the table.  Spearhead can also lead to this situation but only with units coming in from reserve, as they can come in anywhere along the table edge.

Another factor is having to deploy first.  Your opponent can then react to how you deploy.

Now the situation is set up, what is a refused flank? Basically it means the opponent will deploy with his entire army as far to one side as possible.   The idea here is to concentrate his entire army against a smaller portion of your army, and several units in your army (hopefully the more powerful ones) have to spend turns just getting to him.  It means he will be playing with a major advantage the whole game.

or so he thinks.

Part 2 will be how to bait your opponent into the refused flank so you will have a devastating and hopefully unexpected reaction.
Posted by Sorien at 1:46 AM