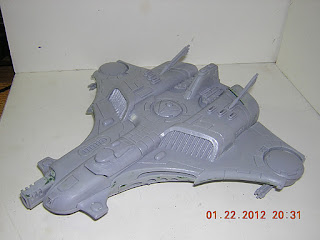 So yay finally finished building my Barracuda! This is going to be my February challenge model on the freebootaz forum. For now I'll just go for a basic paint job to match the rest of my Tau, and may add weathering later if/when the Tau codex drops and I start playing them again.   I am still really, really hoping this makes it in the codex.  Fast skimmer with supersonic and Ariel assault, disruption pods, and it's pretty well armed with an ion cannon, a TL missile pod and 2 burst cannons.  That's quite a bit of firepower.

Starting to finish up the last few 40k projects. Not much left to do..that is until the Tau codex. I'm sure there will be a lot of new stuff to buy!

Other then that I've been building Orcs and Goblins.  Finished the Finecast rock lobber, which instead of snowball it will be throwing ice.  I found a great ice tutorial in a Wyrd pdf, so I'll be following that pretty close for it.  Should turn out awesome.  The 2nd doom diver ski jump is coming along nicely. Crew are done, marker is done, and starting in on the jump itself.

Also finished building all my night goblins.  I now have a block of 50 spearmen and 35 bowmen.

Not much left to assemble. Need to do 20 more boys with weapon/shield, the big spider, and get some more shaman models..both Orc and NG.  I will be looking forward to a day of dry weather for a massive priming session!  Once everything is together I can start getting in some practice games as I paint them up over the next few months.
Posted by Sorien at 2:19 AM