I'm still in a holding pattern for my hobby as time ticks for tax refund season.

A while ago I bought a tactical squad and Rhino because.. reasons.  So I decided to go ahead and add them to my Dark Angels army. They are built, and for now I'm just painting the Rhino.

I painted the interior and now I'm trying my hand at pre-shading.  Last time I tried it was also on a DA rhino and the color was too intense so it covered the shading. Hopefully I can get a bit of a better result this time. 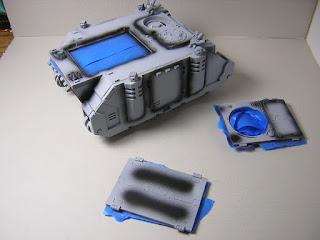 I am also working on another model car, slowly.

But that's it for now. I'll be spraying Caliban Green in the next couple of days.