Road to the Bay Area Open 2

First step is getting done 6 of my Blood Axe Firewarriors.  So far, so good. Getting them to a minimum standard first and then moving on to more detail

Oh, also found out the first tax filing date has been pushed back from the 22nd to the 30th. Which means I probably won't be getting my tax refund in time to order, build and paint the HQ and broadsides.  If that's the case, I'll have to re-base some models to match the Orks. 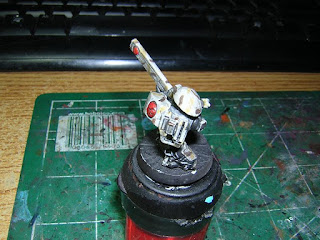 After the Firewarriors are done, I need to make a precise to-do list.  So far I know I need to touch up and paint a choppa arm for the Big Mek (since I won't be taking the burna), paint 23 sets of arms and 2 big shoota boys on the tan squad, and another big shoota for the black squad.  Other "would be nice" things includes adding more detail to the deffkopters.  I might buy and build another Eldar bike so I have 3 of them ..if only I had time.

The move has really put a damper on everything I wanted to do. It looks like this year I'll be stuck with a mediocre paint score.  Really wanted more for my first major tournament try.